Six months after being awarded the contract, we have placed the last storage tank on the left bank of the Scheldt in Antwerp for the new ADPO LLH (Liefkenshoek Logistic Hub) Terminal. The new tank farm has 57 tanks and has given ADPO, a provider of logistics services as well as storage and handling, an additional storage capacity of 37,500 m³.

The terminal has been completed in barely half a year. Thanks to the full scope approach, we took a lot of things out of our customer’s hands. Our team took over responsibility for the entire coordination from design to installation and was the single point of contact, which facilitated smooth communication and collaboration.

All the preparations at the site could be done while the tanks were already being manufactured in our workshops. This method of working significantly shortened the lead time and made it possible to start operating the new terminal in a relatively short time.

The logistical process of such projects is always fascinating as the fully finished tanks are shipped in their entirety. It requires the necessary know-how to manage this properly. For this particular project, in addition to the usual risks we also had to take into account the tides during the unloading, which added to the difficulties. We had to make optimal use of the high tide to unload the tanks because it was impossible at low tide andthe work had to be suspended. Once the tanks were unloaded, they still had to cover a few hundred metres by road to the site where they were finally lifted onto their foundations. 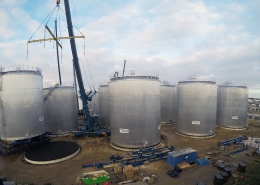 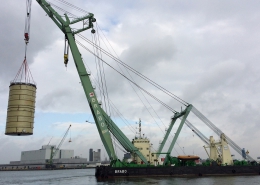 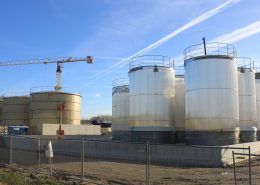 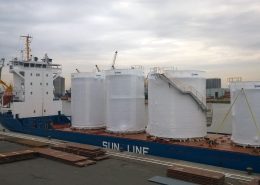